DSi in the Big City

Posted by Eric on June 28, 2009
Posted in: Games. Tagged: camera, dsi, dsi camera, new york city, nyc, photos, pictures, test. Leave a comment
The Nintendo DSi is quite a piece of hardware. Not only can it play a slew of solid and downloadable games, but it also has a decent camera. Mind you, the system doesn’t have a flash function, but in the proper lighting, you get results like these from my trip to New York City. Whoever told you that 3 megapixels is too little for a decent photograph was wrong. 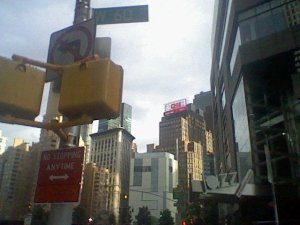 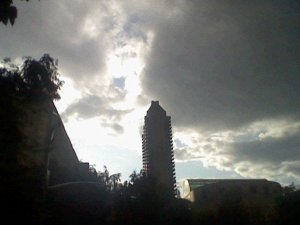 It’s a sad, sad day to be a Michael Jackson fan. However, it seems that in his death, we are better able to see his good side. Now is a good time to remember Thriller and the Moonwalk, but not this travesty.

That’s right. Michael Jackson had a video game for the Sega Genesis. I had a chance to play it at one time. Let me tell you that it sucked far more than Dracula. Everything from the jumping mechanics to the melee combat didn’t sit right, much like the Jackson’s rumored relations with children. Speaking of children, the goal of the game is to rescue such youthful organisms. Looking back at it, they were probably better off with the gang that kidnapped them.

Although in the face of his death, writing typical Michael Jackson jokes like I just did feels somehow wrong. Maybe I’m just very sensitive, or maybe I’m on to something. Jackson didn’t live an easy life. From his father’s constant abuse to bombardment from the media, it isn’t easy being one of the best musicians in the history of American pop culture.

The Trouble With Ebay Today

Posted by Eric on June 26, 2009
Posted in: Games. Tagged: ebay, expensive, high prices, mark up, trouble. Leave a comment
It may be the most convenient way to shop for older video games. It may even have the largest selection of anything out of all the stores in the world. However, that doesn’t make this auction house perfect.

It seems that with each passing month, the prices of video games go up. Back when GameStop sold everything from the NES on, cost was not a problem. now that the physical cartridges are becoming rarer, inflation is beginning to occur.

I thought that we were in a recession. If so, why are people hoarding games for $15+ when you can easily download them legally for $5-$10 on Nintendo’s own Virtual Console. It just doesn’t make sense. I wish that people would stop getting carried away with their spending and start bidding up to only what the game is worth. How else is a sensible person like me supposed to compete within reason?

Posted by Eric on June 23, 2009
Posted in: Games. Tagged: camera, memorobilia, n64, n64 logo, nintendo, nintendo 64, nintendo 64 logo, video game. Leave a comment
That’s right. I recently snagged a rare promo Nintendo item off of Ebay. It’s basically a 35MM camera with the N64 logo on it. The seller couldn’t test it, but I don’t plan to use it anyway. I’ll most likely put it on display next to my other gaming swag. Although I’m still waiting for this piece of history in the mail, I managed to find a decent photograph on Google.

Posted by Eric on June 22, 2009
Posted in: Games. Tagged: pencil, sega, sonic, sonic the hedgehog. Leave a comment
I found this little gem with my colored pencils last week. It’s quite a strange piece of video game merchandise because of the random choice of color. Shouldn’t a Sonic pencil be blue and not yellow? Better yet, this pencil should have been plain old graphite with an eraser. That way, I could actually use it on a day to day basis. Oh well, enjoy some pics that I took with my Nintendo DSi camera.